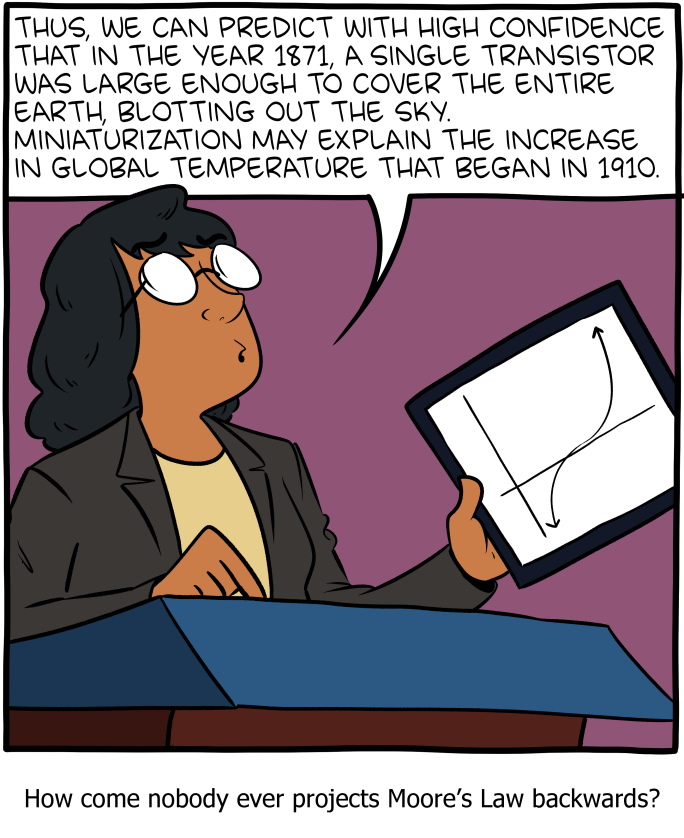 Hovertext:
The other problem is that eventually transistors will be small we won't be able to detect them anymore.

beowuff
Don't worry. It'll still run irc as it's back end, so you can still connect.

Covarr
reply
What if I'm only still on IRC because the rest of my groups are?
East Helena, MT

alt_text_bot
reply
2078: He announces that he's finally making the jump from screen+irssi to tmux+weechat. Hovertext: I mean, wouldn't that just be downright terrifying?

Hovertext: Thank you for browsing this funnybook on the Galactic Network.

If you want to come to BAHFest London's Evolution show, you must buy online tonight by midnight! There will be no tickets at the door!

nailed it. I exist in the bizarre reality where I actually exist.

tedgould
reply
History is weird, but justifiably so.
Texas, USA

You may have heard that the world of finance is getting excited about the potential of the blockchain (Economist, Financial Times, Forbes) and wondered:

What is the blockchain?  What problem does it solve?

The blockchain is the technology behind the digital currency Bitcoin, but it has wider applicability.  It is a collection of mathematical, recordkeeping, and communication procedures that makes it possible to trade digital assets securely.

Why is that a big deal?

Think of how useful it has been to digitize all kinds of information over the past generation or two.1  Digital information can be transmitted from place to place at lightning speed (literally), stored indefinitely, duplicated endlessly, and analyzed, processed, and transformed automatically, all without any loss of fidelity.  This was all flatly impossible until quite recently.  When it became possible, it didn’t just make things faster and more efficient.  It enabled the creation of entirely new ways to produce and consume information that never existed before, and new industries built on top of them.  Think Twitter, YouTube, Uber.

But money hasn’t been digitized - and has therefore been left out of all the dramatic innovation that has happened elsewhere in the economy - because digital information can be duplicated endlessly, which is at odds with the key feature of money: namely, that once you trade it away, you no longer have it.  Think about it: without that feature, money would be useless.

If you have something valuable to sell, and I want to pay you with some digital data that I call “money,” what’s to stop me from keeping a copy of that data and then spending it again with someone else?

The blockchain, that’s what.

You may now be thinking, “There’s no way to prevent the copying of digital data,” and you’d be right.  Even so-called copy-protected data, such as a movie on DVD, doesn’t work on the principle of actually preventing copying.  (It works by scrambling the data and refusing to descramble it unless the playback conditions are kosher.  You can copy the scrambled data as many times as you like.)

And yet the blockchain does manage to prevent “double-spending.”  You might now expect to hear an explanation of how it does so in terms of prime numbers, one-way functions, asymmetric encryption, and other arcana.  But those are merely the implementation details, which we’ll save for another article.  The main idea is this:

I don’t give you digital data as payment.  I give the rest of the world a signed statement saying I paid you.

This is a fundamental and surprising insight into the nature of money: the token of exchange doesn’t matter as much as that everyone agrees an exchange took place.  When everyone agrees on that, then I can’t double-spend that token, even if I’ve made a copy of it, because whoever I try to spend it with will know that token is no longer mine to spend.  And they’ll know that you can spend it… and you_’ll_ know that they know it.

The money at the bottom of the sea

Here it’s worth taking a little digression into the story of the Yapese and their Rai stones.

The Yapese live on Yap, an island in Micronesia in the South Pacific.  You may have heard of the giant stone discs that they use as a traditional form of money.  Hewn out of limestone rocks on Palau, some 200 miles away, and standing on edge, they tower over their owners, who sometimes have to stand on tiptoe just to peer through the holes drilled in their centers.

These coins weigh thousands of pounds each.  They can’t be kept in a coin purse or even stored indoors, so they are propped up for display in public places.  When it is time to spend one, the coin never moves - that would be too difficult, and might damage the coin (or the mover!).  Instead, news of the transfer filters out to the Yapese, who maintain an oral history of the ownership of each coin.  This shared “ledger” of trades ensures that only the current owner of a coin can spend it, no matter where it’s physically situated.

In fact, a rai stone being transported from Palau to Yap by outrigger canoe once famously sank to the bottom of the sea in a storm.  When the sailors got home without their cargo, the Yapese did not doubt the fact of its existence, and since its location didn’t matter, they proceeded to trade it just like their other giant coins.

Imagine that an earthquake strikes the island of Yap.  No one is hurt, fortunately, but all the stone discs are dislodged and they all roll downhill into the sea.  No problem - the rai economy could still continue!  Now imagine that, instead of an earthquake, collective amnesia strikes the Yapese.  No one can remember who owns what!  In that case the rai economy is destroyed and actual economic value is irretrievably lost.  This illustrates that, in a very real sense, the record of trades is the money.

Think about depositing money in the bank.  You go to the bank and hand the teller some cash.  Does the teller put the cash in a box with your name on it?  No.  Some of it goes into a vault, mixed with everyone else’s money.  Some of it is put to work in the form of loans.  In what sense is your money still in the bank?  In the sense that the bank maintains a record of what it owes you if you ever come asking for it.

(To keep the bank honest, you also maintain your own records - deposit receipts, a checkbook register, etc.  Occasionally your records and the bank’s may disagree.  We’ll come back to this idea.)

The problem is that there are multiple recordkeeping systems that have to be reconciled with one another.  When you swipe your debit card at a gas station (say), you initiate a series of steps in which you, your bank, the gas station, the gas station’s bank, and the card-processing network all have to make updates to their records.  For efficiency, those updates are usually batched together with others, and they happen at different times for different participants in this transaction.  The updates get transmitted between and among the participants, and those transmissions produce acknowledgements that also get transmitted.  Each party has to incorporate the others’ details into its own recordkeeping, and if everything doesn’t agree, there may need to be some sort of dispute-resolution step, unless the cumulative error is small enough that it’s not worth it and someone just eats the loss.

All of this transaction clearing and settlement is comparatively slow and expensive and happens long after you drive away from the pump.  The gas station has some “counterparty risk”: it has let you have its gasoline without being sure that it will get your money.  (But that risk is small compared to the value of letting customers pay this way, which is why the gas station accepts it.)

This is all because no one involved - not you, not the banks, not the gas station or the card network - can be quite sure at any given moment _where the money is_2, only that if they follow these procedures, it usually ends up in the right place.  Each entity therefore does its own recordkeeping as a check and balance on the others - just the same way that you keep all your deposit receipts (you do, don’t you?) in case your bank ever shows the wrong balance on your account.

How does the blockchain help?

The blockchain is a ledger that is immutable, distributed, and cryptographically secure.

If the parties in the gas-station example were all on the blockchain, what would be the steps by which the gas station gets paid?

That’s all! When you commit to the idea that the record of trades is the money, there is no separate clearing or settlement step needed. The trade is its own settlement. As soon as you add that transaction to the blockchain, you lose control over those funds and the gas station gets control over them. The gas station can now add its own transaction to the blockchain transferring those funds to someone else - and you can’t.3

In the original Bitcoin blockchain, there is one type of asset - bitcoin - and a predefined way in which new bitcoins can be “minted.” It is possible to generalize the idea of the blockchain, however, so that it can encompass many different kinds of asset (dollars, airline miles, corporate securities, loyalty reward points) with differing rules for issuing units of those assets onto the network. The next article in this series will take a closer look at the mechanisms behind the blockchain (including explaining why it’s called a “blockchain”) and describe some reasons and ways to alter the Bitcoin blockchain to make it suitable for other uses.

I like to think of that scene in All The President’s Men when Woodward and Bernstein have to thumb through thousands of Library of Congress call slips one by one by one, hour after hour after hour. Today a few tap-tap-taps at a computer terminal are all that’s needed.